There, I said it. It is tough being a girl. I will not even go into the study I read about today which ranked the United States 32nd out of 144 countries as being a great place for girls to grow up. Apparently Sweden is the place to be in that regard. Now, I don’t think that my upbringing was bad at all. In fact, I think that Tom and Sallye did a pretty good job raising myself and my two sisters (we also have a baby brother, but since he is not a girl I won’t bring him in to this conversation). We three are all strong, independent, capable women–but that doesn’t mean it is still an easy go for us.

I really believe that I was meant to be a girl as I tend to be quite girly. I did, though, decide that had I been born a boy, I would have totally been a drag queen. They are fabulous!! I do love makeup–I even went to makeup school–and all sorts of “girly” things. But what gets me is all of the “upkeep” that goes in to being a girl in the society I live in. I run with the ladies who get their roots done, manis/pedis, eyelash extensions, eyebrow tatoo-ing, tanning, nips and tucks, and waxing of all types. It’s just what is expected. Is all of it required? No. But sometimes it’s just what you do.

Since this year-long adventure was about trying new things, one thing I came up with fell into this upkeep category.

I got my legs waxed!

Leg waxing was something I had been curious about, but never felt any real need to try. I’m really not that hairy of a person, but I do tend to not shave my legs for weeks at a time, since I value sleep over personal hygiene. In reality, I am usually shaving my legs as fast as I can about 10 minutes before I have to leave for somewhere in a skirt. Considering how many times I cut myself with a dull razor–usually quite a few–waxing might not leave me as anemic from all of the blood loss.

I am not a stranger to waxing, either. I have had my eyebrows professionally waxed since I was 20, in order to combat the almost-unibrowthat I rocked until I started waxing. I’m sure they were not as bad as I remember, but I can’t let them go back to their native state after all these years. Who knows what would happen…?

On last Wednesday, when I decided to do this, I managed to make an appointment for right after work. I took the first one that was available so as to have less time to obsess about it–and perhaps, chicken out. I asked some of the girls at work if they had ever had their legs waxed, but no one fessed up. I was going into this blind and alone. When I got there, it was at my friend’s new salon, but I was with a new girl. She seemed nice enough, but I wondered what she was thinking when I was explaining the real reason for doing this. And why I wanted to take pictures.

“Snap away” she said and instructed me to get up on the table. Since I had decided to only have my lower legs done, I didn’t need to take off my pants. I just rolled them up while she admired the good length of the hair I had. “This will be perfect!” she exclaimed. Never having someone comment so nicely on my unshaven legs, I was a bit taken aback. But I was here to go with the flow and laid back to start the service.

Oh, JESUS! Is what I screamed in my head when she ripped the first length of wax off. I had thought the wax was a bit hot, but my legs don’t ever see the light of day for 10 months out of the year, so I figured they were just a bit wax-shy. No, that was just a prelude of what was to come for the next 30 minutes. With my eyebrows, I have been waxing for so long, that it doesn’t even bother me. I barely feel anything.  This was a completely new unpleasant experience. I felt every hair being ripped out by the root and at the end of each wax strip I would still jump from the pain. By the end, I thought it would get better, but, it did not. I swore just as much in my head on the last strip as I did on the first one. But, to my credit and not wanting to tarnish the reputation of the new salon, I said all of the swear words in my head and did not scream them out loud.

One thing did come out of this experience. As I was laying there, I did come to the absolute conclusion that I would never be waxing anything beyond my lower legs. More power to you ladies, if you do go up higher–you are a stronger woman than I… 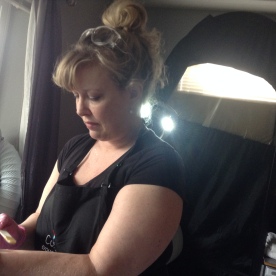 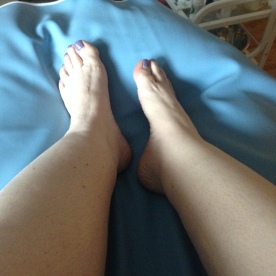 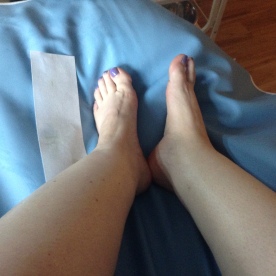